A role for amyloid beta (Αβ) in the healthy brain.

A major hallmark of Alzheimer’s disease (AD) is a pathological deposition of amyloid plaques – aggregates of misfolded amyloid beta (Αβ) forming in the space between neurons. Aβ is produced by sequential cleavage of the amyloid precursor protein (APP) by beta- (β-) and gamma- (γ-)secretases, in a process known as amyloidogenic processing pathway of APP. Indeed, the amyloidogenic processing of APP (and thus Aβ) has been pharmacologically targeted in patients suffering from AD. However, the role of Αβ in physiological brain function remains not well-understood.

In our recent work, Christos Galanis and the team investigated the significance of APP and its processing pathways in homeostatic synaptic plasticity – a major form of plasticity that maintains stability of neural networks. Electrophysiological recordings from APP-deficient dentate gyrus granule cells disclosed an APP-dependent phenotype that becomes evident when network activity is blocked with the Na+ channel blocker Tetrodotoxin (TTX). The APP-deficient granule cells, unlike the control cells, were not able to homeostatically adjust their excitatory inputs in response to TTX-induced silencing, signifying APP and its cleavage products as key mediators of homeostatic synaptic plasticity. A series of genetic, viral and pharmacologic experiments revealed an essential role of Αβ and the amyloidogenic processing pathway of APP (and not APPsα) in homeostatic synaptic plasticity.

How does Aβ mediate homeostasis? It seems that Aβ acts on synaptopodin-associated intracellular Ca2+ stores, i.e., spine apparatus organelles, which have been recently linked to synaptic plasticity induction in the adult human cortex.

Hence, some of the side-effects observed in patients treated with β-secretase inhibitors may have been caused by interference with the ability of healthy neurons to express Αβ-mediated synaptopodin-dependent homeostatic synaptic plasticity. Our results also provide an explanation for elevated Αβ concentrations in other neurodegenerative diseases, since Αβ seems to be vital for brain homeostasis. 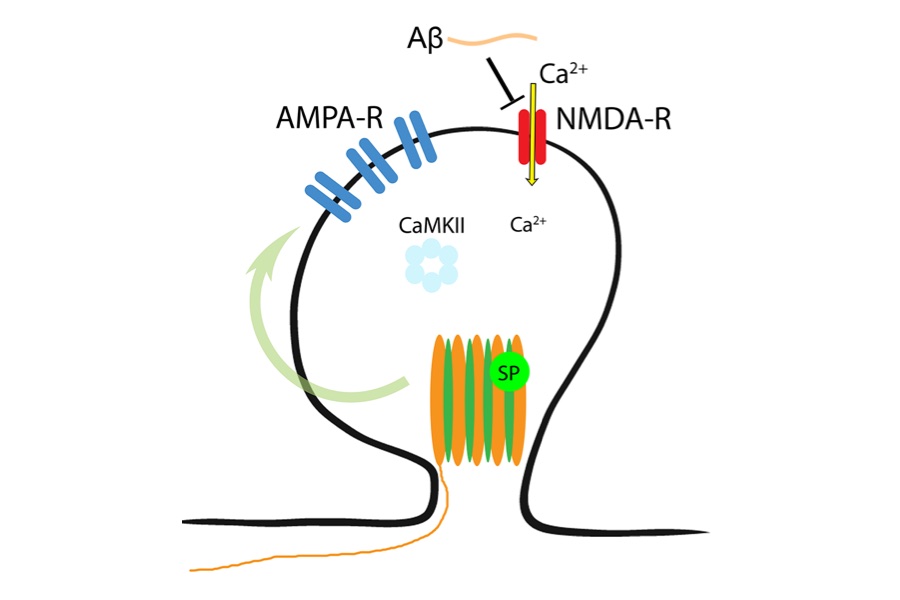